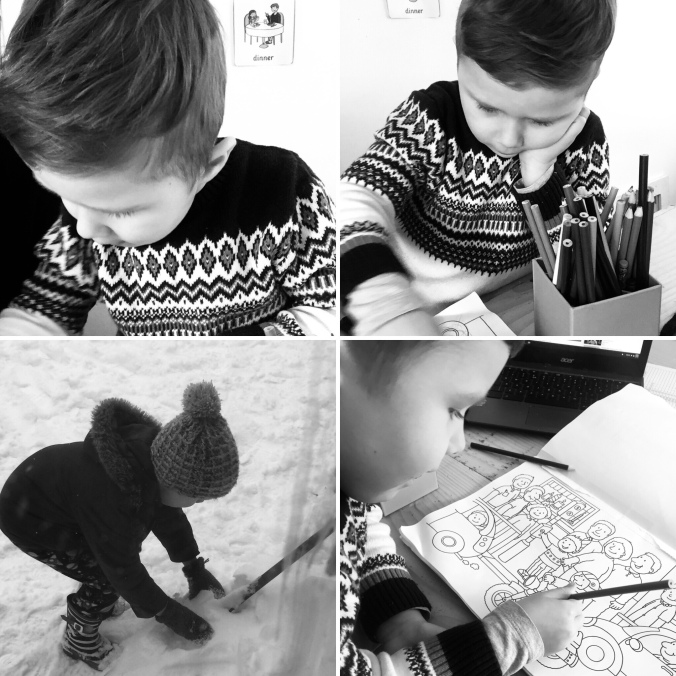 Well, we weren’t expecting snow in March that’s for certain!

It honestly feels like half term but without the added expensive, other than the boys eating us out of house & home.

Having snow is very much like the hottest day of the year (other then it being the coldest) everyone heads over the county park for hours of fun, but for us we haven’t been able to join.

It’s taken Teddie 4 days to go out in the snow, even when Gareth & I had a snowball fight in the garden with Harvey & Alfie Teddie wasn’t bothered in the slightest. Teddie’s fear of getting wet overrides the enjoyment of having fun in the snow.

Walking to school on Monday brought a challenge in itself. Teddie had new school shoes but wouldn’t allow them to get wet so we walked in his wellies- which is fine I hear you cry, however Teddie will not allow you to change his shoes once he’s at school, new or old ones.

We have spent the week segmenting phonics using alphablock pec cards, drawing, crying, and eating half a ton of bread!

This morning Teddie saw I was getting his pants and socks out, he came up close to me and said;

Having even a few days off school I fear we will be back to square one with his transition. The first day back to school after half term is normally fine but Tuesday onwards he’s normally very unsettled, this could possibly be the same next week.

Cabin fever has certain set in, I haven’t been able to get anything done as Teddie likes the laptop on, only Godsend is he never wants the Tv on!

I am well and truly over the snow, I’d like to be able to leave the village without fear of not getting back in but most of all I need the routine back for Teddie.

Leaving the house has always been a battle for Teddie if he had his way he’d stay at home in his rocket PJ’s all day every day!

We love our Bear and wouldn’t have him any other way!