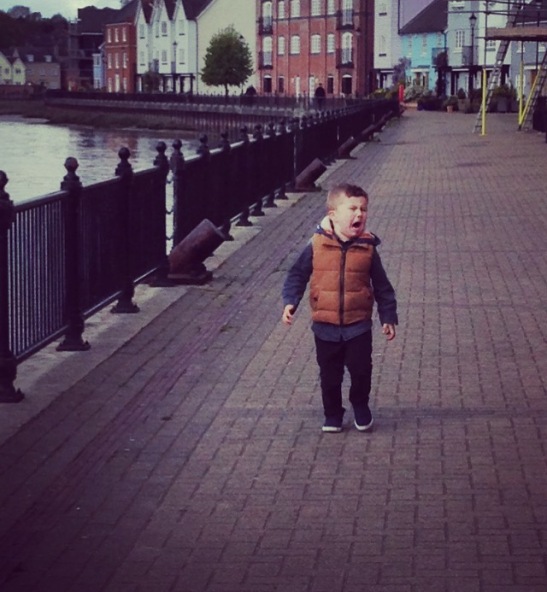 There was a time when I was really worried what people thought of me and the situations I was in when Teddie was having a meltdown (like in the picture). Now I actually couldn’t care less, in fact, I feel sorry for them people.

I have never claimed that my children are perfect because they really aren’t, but those people who turn their noses up at you or make judgemental comments do not live in the real world. Why can’t we just let kids be kids and let them learn from their mistakes if they want to have a tantrum in the store, let them, how can you teach your child what’s right and wrong without them experiencing everything EVERY child goes through.

This week I overheard a comment from a parent who’s child was pushed over, she know’s would did it (her words),  I had a feeling the comment was made for me to hear but I couldn’t care less if it was Teddie as put aside him having complex needs he’s a 3-year-old…….. all 3 years push at some stage!!

We had a big blow this week, after waiting 6 months already we were hoping Teddie would be seeing Cadu (Child Assessment Development Centre) in May but after calling to check I was told they are only just sending letters out for children who were referred in August, Teddie was referred in November!! There are 30 children ahead of Teddie so he may not be seen before he starts school in September!!

To say I was angry was an understatement, I completely appreciate they are snowed under but something has to give, they need more help to get through the backlog, how can children be supported without being put on the correct path.

Teddie is lucky he receives a high level of resources I have sourced for him but not every parent can offer or even know what’s available. Before long it’s the children that have waited so long for the correct diagnosis get branded the “naughty boy/girl” in school when all they want is the help!!

We will continue to push for everything and more if we feel Teddie will benefit from it, every day we see improvements and we learn so much from him!!

Bear and I have been out all evening so he’s had a late night, to his joy. He insisted on drawing something when he got in, I think considering he hates holding a own he's done really well (copied it from the first pic) I've posted many times before about the videos Bear likes to watch if it's not large number formations it's this video, It's the gummy bear song (🤬) but extremely distorted! The sound is horrendous but Bear LOVES it and more importantly seems to relate to it. These videos often give me an insight into how he sees the world 🥰
Teddie’s new find! He LOVES this writing book, so much so we won't let it out his sight. He wants so much to show it at school he's worried he’ll break it so he's keeping it as ”a home book” 🤣
It's taken me a day to post these pic’s as I've had a million and 1 things on the go, here goes, 4th time lucky 🍀 . It seems forever since Teddie has worn a hat that wasn't his winter woolly hat, he has so many funky hats I'm pleased he decided to dust this hat off as it's one of my favourites! 2nd fav has to be his mad hatter hat . Today like most Sundays it's scan and go at Tesco, Teddie still LOVES ’being a customer’ he has everyone smiling at him while he scans our shopping with so much pride! . Midweek Teddie said he was going to play football in the garden at the weekend. I was hoping he’d forget although we all know forgetting isn't something Teddie is capable off 🤪 The garden has been like a swamp but as we haven't had much rain these past few days Teddie and Alfie took full advantage and went out to play, even though it was freezing 🥶🥶
When trying to get a pic of Teddie's new hair cut is harder than cutting it 🤣🤣✂️✂️🤣🤪🤪 #haircut #sensory
What a year this one has had! Gareth and I were chatting yesterday about what we thought Teddies best bits of 2019 were and we both agreed he's truly a superhero! Many adults would struggle when faced with the hurdles Teddie has faced, however, he finds a way to smash his way through all eventualities. When I fear the worse Teddie tackles it with kindness and hope. Anxiety has been the cause of almost all Teddies issues this year, it's the one thing that hinders him the most, it has a way of consuming him like nothing else but as the year has come to an end he seems to be able to express his fears and emotion better. Although I will continue to worry about Teddie he's becoming a very independent young man who we are extremely proud of🥰
He melts my heart, almost every day but some days more than others! “shall we be customers mum?” Teddie LOVES going to Tesco and using their scan and go. We normally have our shopping delivered but we decided to do it ourselves, big shop yesterday and a quick visit this afternoon to grab some more storage boxes (on sale) What feels like moons ago Teddie wouldn't have been able to enter a supermarket let alone scan a shop due to sensory overload, however, this past year the noise hasn't been an issue 🤞 The cashier had to double-check a few of our items, she could see how proud Teddie was of his scanning skills she gave him a few blue charity tokens (from previous customers) to put in his chosen charity box 🥰 Teddie is always so happy with the littlest of things putting a smile on his face, he never takes things for granted and appreciates everything which is what makes him who he is 🥰 Never stop being you Teddie 💪 #onlyonebear #autism #sensory #shopping @tescofood
%d bloggers like this: