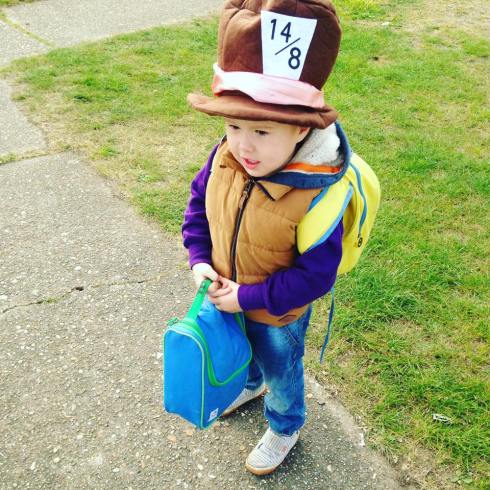 We were super pleased to find out Teddie will be attending the village school where his middle brother goes (he’ll be in juniors though). I have set up a meeting with the head and their speech and language therapist for Friday, our phone conversation was really inspiring on both parts and feel Teddie will receive everything he’ll need come September.

Teddie always associate’s things with what’s happening, so this morning he saw his school jumper out, this can only mean one thing……….. today is a preschool day!! He was over the moon to see his uniform, he ran over to his pecs board and put up his pictures of what he’ll need to get ready.

School bag on his back and lunch bag in hand he was ready for school. Teddie’s never had an issue with being left in new or old environments, he welcomes change as long as he knows what’s happening. He went through a stage where everything HAD to be on his agenda, this is a stage where I think we have improved greatly in.

I put a gilet on Teddie this morning, although he could have got away without wearing one he’ll need something to put on for when it’s outside play. This is another thing where using things as an association, Coat = outside play! If Teddie didn’t put a jacket/coat on he’ll think he can’t go out and play and get upset.

Teddie’s preschool is an amazing place to be in, the environment is just superb for him and the other kids. It’s in a large hall which is just a reminder of my school, it’s so welcoming and the staff are second to none. Teddie has been a learning curve for them but they have been truly amazing with him. Everything we do at home they do in preschool, they started to use Pecs in preschool, they use Gemiini with Teddie so he’s using it in a group environment. Putting your trust in someone is so hard with any of your children but more so when they have addition needs, knowing he’s getting the support at preschool feels like a weight has been lifted as for some that’s just not the case.